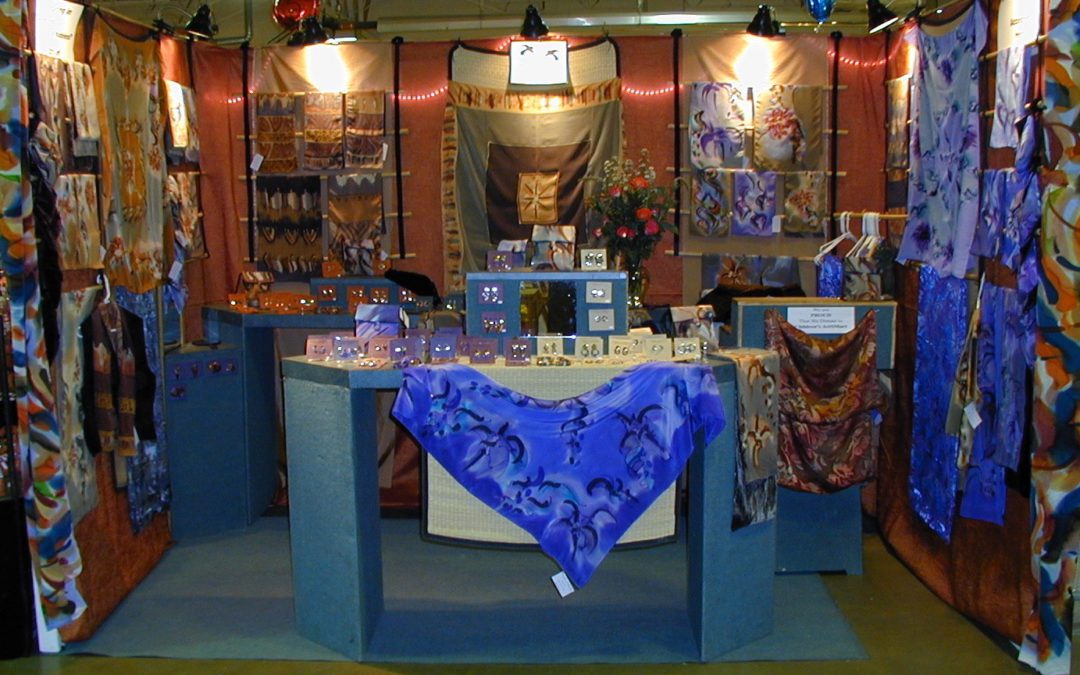 The origins of my display work go back to school days when I was first immersed in theater and stagecraft. There I contemplated the possibilities of influencing mood and psychology through the combination of light, sound and visual design.

Then, just out of school, I had a magazine route, where I trafficked in print advertisement for years. That was still the main way people consumed information in those days. I read more magazines during the late 70′ s and early 80’s than anybody else I know. My head was filled with all the stuff. I delivered it for a living. Leapfrog a few years and one or two occupations forward and I landed in television production at Grassroots TV, the nations first public access station.

All this had its way of tuning me in to marketing, mass communications and programming. The fine arts became my scripture. Zoom ahead again, then. For over a decade, my lady and I travelled 20-30 times a year showing our original, one-of-a-kind jewelry and fashion accessories which we designed and hand-made for juried art and wholesale trade shows coast-to-coast. While our art earned frequent awards at those venues, the displays we designed for our exhibition began to receive attention as well.

Here is one of our “Best of Show” displays from the early 2000’s. We made the furniture out of light plywood and acoustic wall covering. Seafoam was what they called that color. To its fuzzy surface, using the hook side of Velcro, you could stick anything, endless numbers of times. Over the years, carded merchandise covered every surface of those columns and countertops, from the waste up. There are tall, stand alone columns that go with this display which aren’t pictured. You could stick ton’s of art on one, and a full length mirror besides.

Those triangular modules stacked in such a way they made squares. Because we sometimes drove and sometimes rode trains and planes, the display fit neatly into the back of a small cargo van or ten-odd blocks of cardboard. The wall display integrated laddered bamboo canes for hanging our hand-painted-silk scarfs, shawls, vests, purses, belts and jewelry on.

We went with durable, earthy Japanese goza mats, in the background. Meanwhile, we got extra mileage out of utilizing four color pallets from our art designs to organize the flow of the gallery as well as draw attention to the many potentially pair-able sets of merchandise.

For me, art fair booth, like a shoe sales room, or any display window, is like the proscenium stage of a theater or a single shot of cinema. Use it to experiment with ways to convey feelings and ideas efficiently and compellingly. Load either with the most essential information for best results.

Apologies for the quality of the following images. Professional ones will replace them as soon as they are available.

The windows for the Goler Shoes 2017 Summer season were inspired by the Indian corn we have been growing for the past 3 years in the backyard. In the late fall we typically hang up several dozen red, blue and multicolored ears in my garage to dry. Once dry, you use a high-powered blender to turn fresh kernels into flour. We eat home grown indian corn all winter.

So, I was walking past the corn drying in our garage one day last winter, when I noticed how some of the ears bend at the tip. Before long I imagined  how they could be fashioned to look like high-heeled shoes. I’m combining the food that sustained the natives here in Santa Fe, where Goler Shoes is headquartered, with merchandise that draws tourists from around the world in the 21st Century. The intent is to keep alive the past, while celebrating the present as an ode to the future enhance appreciation of all three.

That became my excuse for designing the fantasy figure that currently hangs in the main display of Goler Shoes in Santa Fe. She came to life so she could wear my high-heel shoes of corn, and so the real world shoes,\ displayed around her, will look even smarter and more sexy than they already do. Let me ask you. What is an more pure object of art than a high-heel shoe?

It all began with those corn shoes. I needed them to look like something nature made. For weeks I mused over what material to use. The answer came from other things that were drying next to the corn, namely sunflowers. Their stems had an ideal thickness, color and feel, with the kind of slight variation that nature makes so pleasing. So I hot-glued a couple lengths of that sunflower stem to a well-matched pair of red corn ears and they strode off into a world of pure imagination.

What kind of creature would wear such shoes? When I got the idea of making a fertility princess, I went mining those sunflowers again for hidden fortune and found her face. The flower I chose had been picked early last fall. It wasn’t immature, but it had a more tender appearance than the larger ones harvested late season.

The Princess herself is waiting for her boyfriend to fly up and fertilize her any moment. She’s both nervous and aroused. The delicacy of the flower’s center conveys vulnerability in her expression, while the totality of it radiates a confident, regal bearing.

There were also some Christmas wreath blanks that were hanging in the garage from last year. I stripped one down to support the bust and arms of the budding monarch. The garden is full of culinary sage. It’s my favorite herb, the leaves have just the velvety flourish one needed to drape a budding madonna’s bosom. Not to mention their intoxicating aroma.

Her highness’s lower stories are decked out in flouncy petticoats. Lot’s of plants were utilized, in fact. I layered on alternating stems of dried fronds in shot-sized coriander, moving up to pearl-like strands of horehound, and finally a graduated range of downy mullen interwoven for her skirt.

Mullen has grown everywhere I’ve ever lived. It’s pelt like surface is light green, broad and inviting. In the spring up high, you can wipe your behind with it, if your ever short of paper. Normally it shoots a stalk and bud two to six feet tall by fall. Happily, mullen and sage both grow in voluminous, velvety tongues. I was drawn immediately at how they recall one another, as friends, tying the upper and lower garment together, like a well-matched costume of the Renaissance.

Her majesty’s soft heart and majestic wings are made of apache plume, a local shrub I have sculpted a lot of fantasy creatures with for many moons. I’ve gotten to know this plant well. Normally, you harvest them for their strength and shapability. During this time of year, however, they grow a profusion of fuzzy, mauve plumes, which soon dry out and vanish on the breeze. It looks like eider down. I took a gamble that those I harvested a week prior to the sale, will last at least a full three weeks in a store. They lend a refinement that would be hard to find in any of the other native plants anywhere around here.

Finally, she is crowned in corn husk, so that from head to toe she shows off the plant’s amazing personality, it’s versatility, and its aesthetic charm.

Finally, we present the men’s window display. This season’s slogan Step Into Your Personal Myth was conceived of by my lady, the multitalented Phoenix Simms who can be learned about more extensively here, (link to OCC About page, and here (link to phoenixsimmsart.com). Her idea for the slogan came after the mask was finished, which was also her achievement.

I was out of time. I reached out to her for help. I realized immediately I had asked the right person.

Phoenix got busy, utilizing most of the same materials I used to make the Fertility Princess, aiming for something more masculine this time. The mask which resulted impressed us both, at first sight, as something from myth.

I didn’t realize until I reviewed the above photograph, just now, but the chunky pine blocks behind the head serve as neck and shoulders to the face in the mask. That was pure luck, an accident, that the scale was so well-matched.

The effect was quite surprising once I spotted it. It makes the piece all over again for me. With no second thoughts, this blend of word and image speaks to me, on an essential level, while it simultaneously manages to convey an artfully inviting approach to men’s dress for Summer/Fall 2017.