The Joy Is In The Journey: “The Cardboard Bernini” 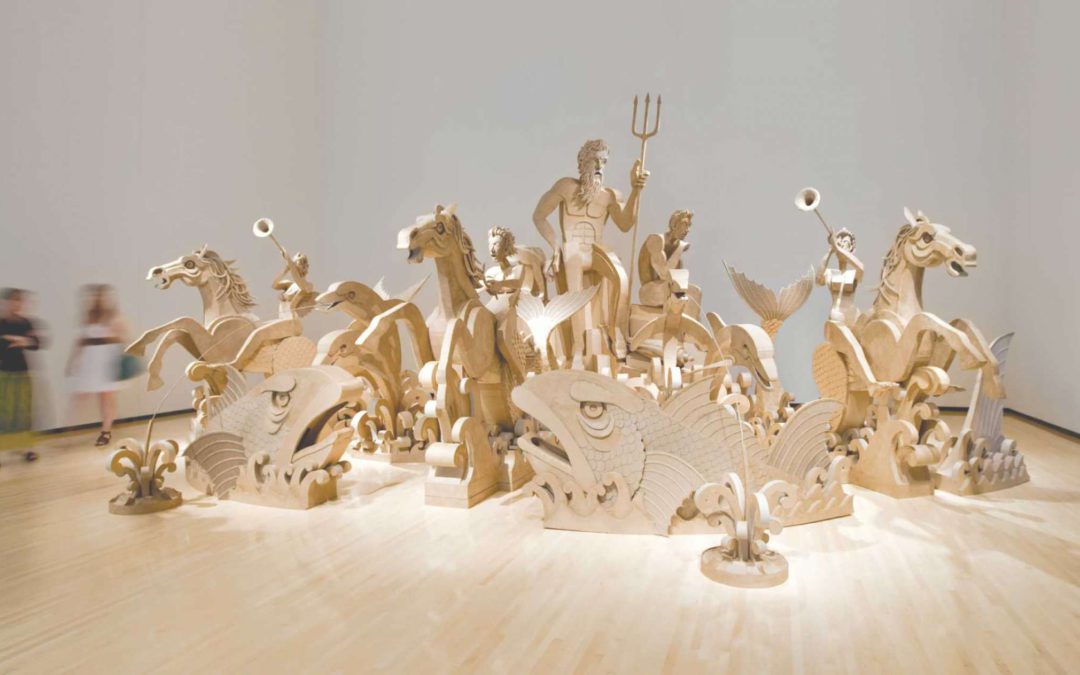 Chasing virtuosity, the mid-20th Century born illustrator and sculptor, James Grashow, performs a tour de force over the course of 78 breezy minutes of “The Cardboard Bernini.” In this engrossing, feel-good artist bio, satisfaction comes in the living space of extended bouts of creativity.

I don’t think it would spoil anything about the story for you to know in advance that many of us baby boomers were introduced to this man’s work as an illustrator 40 years ago. His folksy, intricate woodblock prints decorated some of the most classic LP record album art of all time. I hope at least some of you enjoy the tingle of nostalgia that came to me seeing his early work again after so long. As it turns out, James Grashow has made a pretty good living ever since.

Pushing 70 now, Grashow is at the height of his powers and vows to be reaching for something heroic here. There are scenes of him straining his ligaments, blistering his fingers, sweating over his monumental task, dedicating three solid years of his life on an elaboration of Bernini’s Trevi fountain in Rome, made of cardboard, paper and glue, which he then plans to abandon it to the elements.

Mixing interviews with archival photos and movie clips, the documentary playfully reconstructs his unique life, inter-cutting scenes of his latest sculpture being born with flashes from the past. The visual design of the movie helps sustain our attention over the course of a long and storied career.

A highlight of these proceedings is his wife, Lesley. The artist attributes his success to their partnership. The bond between the couple is both admirable and palpable. His adult children call him a “wizard.” Their upbringing was “magical”. We get a glimpse of their exquisite Connecticut residence, which looks like something out of one of his shows.

His family contributes abundantly to the story of this grown man with the child’s imagination who has been producing original art full-time for fifty years. But the real enchantment to which his wife and children refer is the creative swoon that James Grashow floats around in most of the time.

The artist appears intoxicated with life, yet claims he is afflicted with existential blues. The notion of eternity’s indifference to his creations and the notion of his own death is an ever-nagging bummer. Grashow recounts a life-changing story of when his close friend, the art dealer died. The artist went to pay his respects and some favorite sculptures of his, giant paper people made of maché and wire, his friend had displayed for years, were piled in the back yard decomposing, exposed to the elements. It upset him, but he also saw the beauty in it. This event made Grashow plan the most ambitious art project of his career. We are invited into the process from conception to last rites.

His wife, while obviously proud of her husband’s accomplishments, is not 100% onboard with his decision to dispose of his newborn masterpiece in its infancy. You wonder what his wife does for a living besides being mother to their grown kids and an accomplice to the wizard. She’s got her own inner life, for sure, and can be as interesting a study as her husband.

I’m not suggesting the life of a professional cardboard bender is devoid of struggle. Birthing original art can turn into a decidedly more difficult proposition at any point in the process. Imagine the deep doo-doo this holy fool must have found himself in, from time to time, over the 150 solid weeks it took to construct and display his pulp homage.

The finished work emerges in the third act, exhibiting a mature decorator’s sense of style and execution, but resembling Bernini’s monument in design only. You can’t make cardboard do what marble can. He does, however, achieve just about everything you could imagine, given the material.

Concerning what he calls “the back end of my art,” its disintegration becomes vitally important to Grashow. In embedding the demise of this piece into the project, it becomes a ritual to address his deepest fears. He finds peace now when it’s all over, instead of regret. “It was perfect,” he says. It was pretty good for us too.