Lies Are Like An Umbrella: A Preview of “In Another Country” 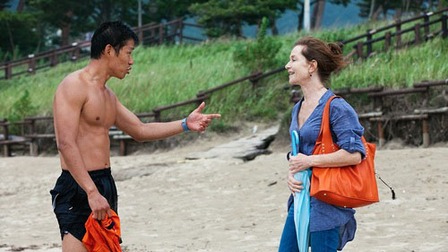 “In Another Country” (2012) by Hong Sang-soo is about the emotions we all share but not exactly in the same native tongue. Through three travelers’ excursions in a picturesque seaside village, it asks if we can ever really be home in the inner landscape of another.

This playfully directed South Korean film in English, is pleasing to the ears, easy on the eyes and unwinds with the leisure of a seaside holiday. Self-expression through words and its many modes of traffic are put on parade here. A handwritten note passed to a romantic suitor from the object of his affection becomes lost in translation. A prayer for happiness is inscribed on a roof tile. A portrait drawing is offered as an answer to a question. Movie scripts, love songs, ebullient hand-gestures, cell phone dialogs and road signs all figure into this story as well, and those communications between people seldom reach their common objective.

Over the phone, Anne’s (Isabelle Huppert) lover informs a woman that he can’t make their rendezvous, even though she’s come all the way from France. It becomes one more glancing conversation. Never a direct hit. Always there is a loss of meaning and a missed connection. By herself, she goes sightseeing for want of anything else. Like the young screenwriter who’s imagination she wanders through, she is stuck someplace with nothing better to do.

In Another CountryWhile these characters from France and South Korea bridge the language gap with the help of English, it’s a shaky bridge at best. Even though they all mean well by what they say they are unconsciously manipulating each other in order to be loved, to mask fear and desire or to conceal jealousy. The main characters grow anxious for what they are missing. Is conversation always a negotiation between love and power, or is it just a relief from solitude? Are all talkers like sightseers on vacation, searching for any good view of the sea, where the breeze and tides converse in soothing tones and a nearby lighthouse lends a companionable presence?

On one excursion the main character stops by the side of the road and makes an audacious whinnying sound toward something off camera. Turns out she is directing it at some goats in a nearby field. The goats don’t respond. Her lover asks her why she did it. He doesn’t understand either.

The word goat, is itself is problematic word in Asian languages, sometimes meaning sheep, other times meaning “fool,” or “laughingstock.” The lifeguard at the beach whom she meets, the most colorful of the film’s characters, might well be called a goat in Korea. His over the top attempt at wooing her is both amusing as well as touching.

The filmmaker seems to ask if we aren’t better connected by the howling and neighing of our inner beasts than we are by the eloquent refinements of modern language? This may be so, if it weren’t for the language of cinema of course.