The Abysmal Gaze: A Preview of “Leviathan” 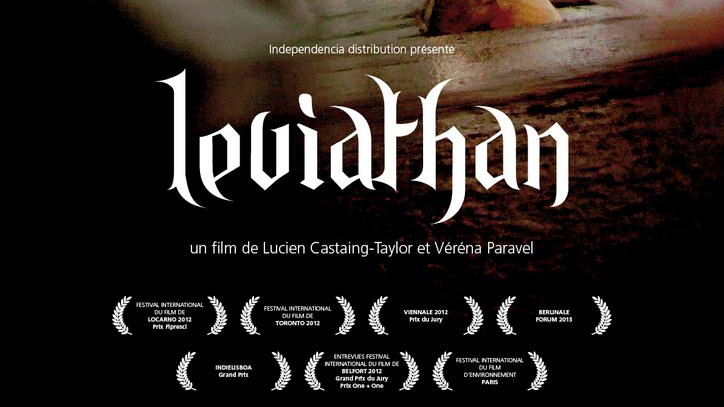 “Leviathan”, screening at the Santa Fe Film Festival this year, is a highly effective horror film made all the more so without a clear beginning, middle or end, because what we witness goes on in real life, day after day after day. With the preponderance of super-portable HD cameras, more and more directors are adopting this shotgun approach to filmmaking.

For his latest outing, anthropologist/filmmaker Lucien Castaign-Taylor collaborates with fellow Harvard faculty alum, Verena Pavel. We are in experimental territory here, with filmmakers aiming their panoply of lenses at the craft, crew and carnage of a Bedford, MA. commercial fishing outfit. Some viewers have found this non-verbal work of pure cinema, bleak, directionless and detached. Some will praised its democratic aspirations for the audience. All have found it visceral, challenging and unlike anything they’ve ever seen on a movie screen.

Castaign-Taylor has also collaborated with his wife, Ilisa Barbash,Associate Curator of Visual Anthropology at the Peabody Museum, Harvard University. “In and Out of Africa” (1992). It is an ethnographic video about the African art market that has won eight international awards. Those two also gave us the film “Sweetgrass” (2009), which played at the Screen in Santa Fe, with a personal appearance by Castaign-Taylor. “Sweetgrass” is a mournful reflection on the American West and the primordial, tenuous symbiosis between humans and animals.

The absence of a narrative arc in “Leviathan” can be unsettling, but the creative duo at its core are rightly to be celebrated, by their peers at least, for delivering a work of profound ethnographic importance. For non-academic audience members, this is a monster movie extraordinaire.

“Leviathan” at the 2012 Santa Fe Film FestivalIf you long for a prolonged derangement of the senses, the big screen experience of this is not to be missed. The preponderance of dark, stark, compositions, above and below the surface, drag us through the deeps of our own conscience as constituents of the callous species who use machines to decimate earth. Most if not all of the audience are end users contributing to this ecological nightmare. We are the digestive tract of this mechanical Leviathan, the Biblical sea monster that is described in the book of Job: “Nothing on earth is his equal—a creature without fear.”

For viewers that like to be challenged, “Leviathan” filmmakers explore the deconstructive potential of the documentary form, effectively eviscerating its subject with the blunt-edge of dozens of cameras, at angles odd and even, frames fixed and floating, exposures majestic and confounding plus an abstract soundtrack both creaky and pounding.

Like the marine world under attack, the audience is not spared. This factual report cuts to the core, not in a preachy fashion, not with a message or an agenda, but with sheer observational authority. What we conclude from all of this is entirely up to us.
– – –